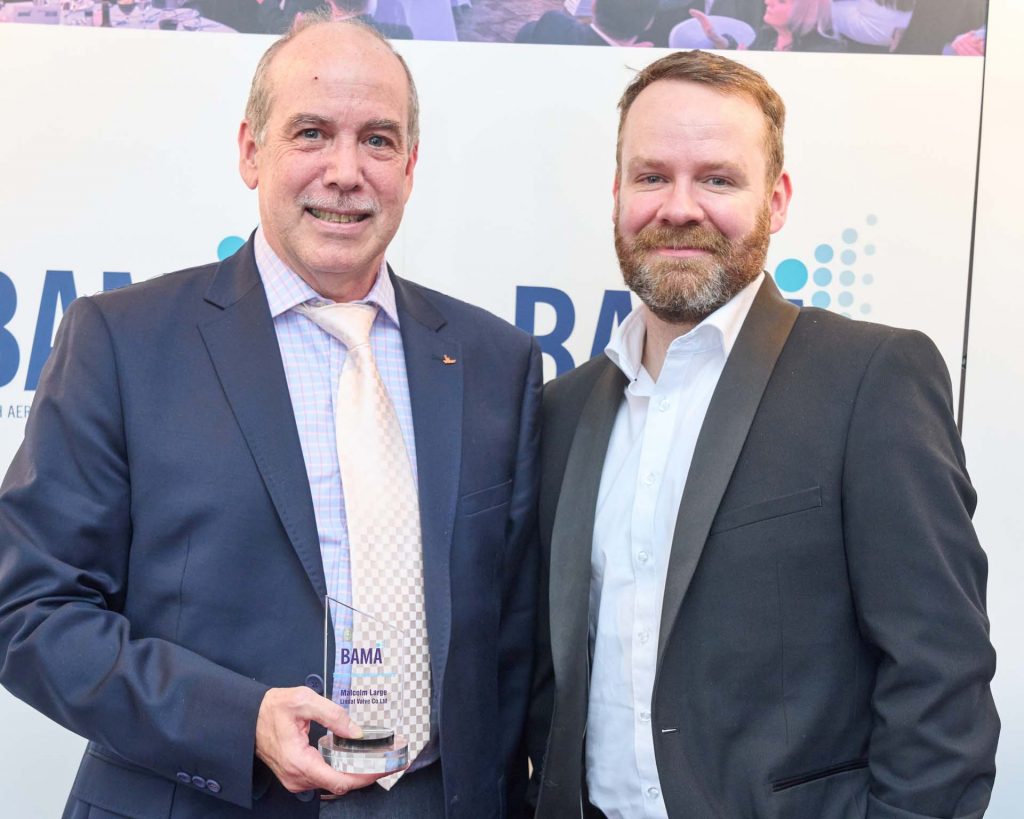 Our Technical Manager, Malcolm Large, picked up a special recognition award at the British Aerosol Manufacturing Forum. Serving the aerosol industry for 37 years, his ‘depth of knowledge in so many areas is almost without peer’, according to BAMA Chief Executive, Patrick Heskins.

We spoke to Malcolm about how his career path has helped LINDAL deliver valuable technical advice for customers, and how it has encouraged him to share his knowledge for the future of the industry.

Before he began his career with LINDAL in 1997, Malcolm gained a degree in Chemistry before working as a chemist at Newman and Pugh Aerosols in Birkenhead. When the company was acquired in 1987, he moved with it to Hull where he progressed to Development Manager. He says: “The beginning of my career is where my passion for aerosols really took off, I see this as the time when I served my ‘aerosol apprenticeship’.” He later moved to Portsmouth to work with ARD where his role as Technical Services Manager saw him working more closely with customers. It was during this time that Malcolm began to see the impact of new regulatory compliances on the industry.

In 1997, following LINDAL’s acquisition of ARD, Malcolm became the company’s Technical Manager. He says: “At that time the landscape of the industry was quite different to what it is now. There were more fillers in the UK, and I was liaising with big brands before they centralised production.”

Over time, Malcolm witnessed another shift as the industry became increasingly global. His role expanded, and as a result, he spent more of his time abroad. He worked with large multinational customers, helping them globalise their brands and respond to new market demands. Alongside his colleagues in LINDAL’s Global Innovation Centre and laboratories across the group, Malcolm has played a role in assessing every element of the dispensing system, having worked to improve spray performance, spray rate, particle size, health and safety features and conducted line trials to meet new regulations.

He continued to navigate regulations alongside his work, sometimes anticipating new guidelines before they came into effect. He says: “The industry has been and continues to be steered by the introduction of numerous regulations which are continually evolving. For example, the big step away from non-flammable CFC propellants (due to the Ozone issue) to the extremely flammable hydrocarbon propellants was a move that saw LINDAL as one of the first to implement necessary changes to valve/actuator specifications to control the flammability of aerosol sprays before CFC’s were actually banned for aerosol use.

Malcolm now sits on the Regulatory Affairs, Technical and Air Quality panels at BAMA. He also presents the propellent unit on the BAMA training programme and contributes to writing technical guides for the association. More recently, his involvement in supporting the industry has extended to his involvement in sustainability, working alongside aluminium packaging recycling organisation, Alupro.

Asked what his advice would be for people joining the aerosol industry Malcolm advises to not be afraid of asking questions and to be open to making mistakes. He talks about how his own learning curves and early experience as a chemist have provided greater depth to his knowledge. He says: “Staying on top technical and regulatory developments has enriched my career, and over the 27 years I have worked for LINDAL I have seen how critical everyone’s know-how is in delivering the best for customers.”

LINDAL Group is a worldwide leader in the design, manufacture and sale of valves, actuators and spray caps used in aerosol products. The Hamburg, Germany-based company has more than 60 years of experience with innovative dispensing solutions for the cosmetics, household, pharmaceuticals, food and technical industries.

The LINDAL Group is represented by subsidiaries and licensees in more than 15 countries throughout Europe, Asia and The Americas. The company is renowned for its innovative designs, which deliver optimal functionality and return on investment. As a result, LINDAL packaging solutions are the choice of the world’s most prestigious and trusted brands.

Looking back on 2022: growth, people and sustainability